Toronto's BeastMODE league held their second event of 2015 this past Saturday (Jan. 17), with a light afternoon of rap battles in front of a small community of friends, still recovering from the recent death of D Tha Suspect, one of their longest-serving emcees.

The card had an unofficial "BeastMODE vs. iBattle" theme to it, with several of the Connecticut league's emcees making the journey north to face off against the local talent.

It went down at Big Picture Cinemas in Toronto's east end, a proper movie theater with a setup similar to what we can expect at KOTD's upcoming "Blackout 5" event, though that will be on a much larger scale. With the audience so spread out and distant from the emcees, it did feel like reactions were quieter, but it also discouraged people from talking during the battles, which has been a problem at KOTD's recent events. Personally, I was just happy to not have to stand for eight hours.

Almost all of the battles on the top half of the card could’ve been considered battle of the night, and each of them came up individually when I asked people for their pick after the event.

BeastMODE has been quietly developing some real talent, and there were a few emcees who performed on Saturday who could hold their own against established opponents on a Toronto GZ card. 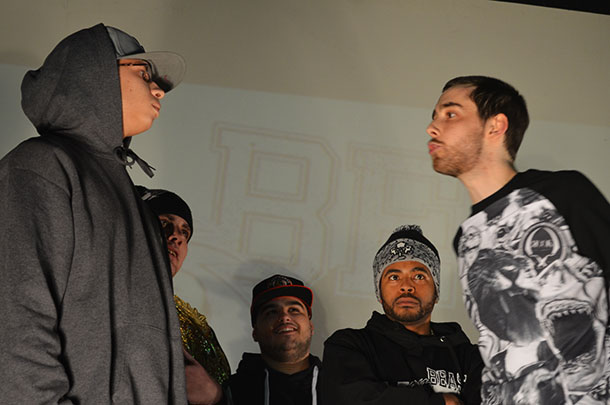 Suspense vs. Luke Nukem. Photo by Chris Mitchell for BattleRap.com.

This was my personal pick for battle of the night. Suspense brought three nicely structured rounds and stayed focused with a subtle laid-back flow. His second round was the coldest of the night, telling a true story about meeting Luke in Connecticut and thinking he was a tweeker, before eventually realizing that the guy had Tourette syndrome.

Luke flipped it perfectly ("He said I got Tourette's, well it's true what he's rapping / So I'ma fuck him up, cause I SWEAR I can't control my actions") and the crowd went crazy. His writtens were even sharper, with tons of original angles, clever nameflips and well-crafted bars.

Luke also picked up BeastMODE’s 2014 Rookie of the Year award that night. Keep an eye out for his name on cards around the Northeast in the next few months. 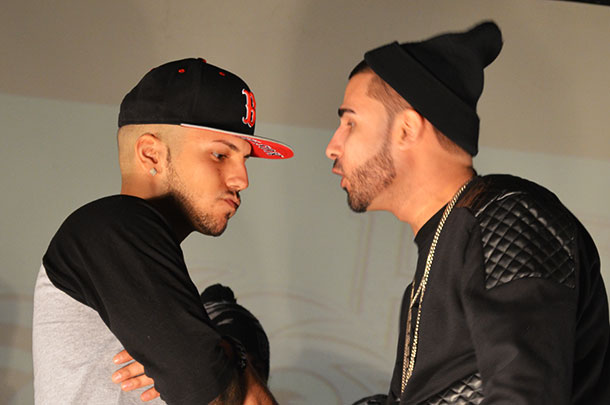 Z Hunna is a new name on the Toronto scene, and the promise he showed in his warm-up battle at GZ Mississauga is definitely developing. His stage presence was more commanding, his performance was more aggressive and his lyrics will appeal to street-battle fans.

Most readers will already recognize Crakk from his URL, KOTD and GZ battles, or from his SONS crew membership. Crakk delivered cleanly and brought his typical next-level wordplay, though with some groaners thrown into the mix too. He clowned his opponent, accusing him of being the Arabic version of Tycoon Tax (who was in the building), calling him "Tycoon Taxi Cab" and "Iraqi Tax."

Q The General vs. Slow Loris 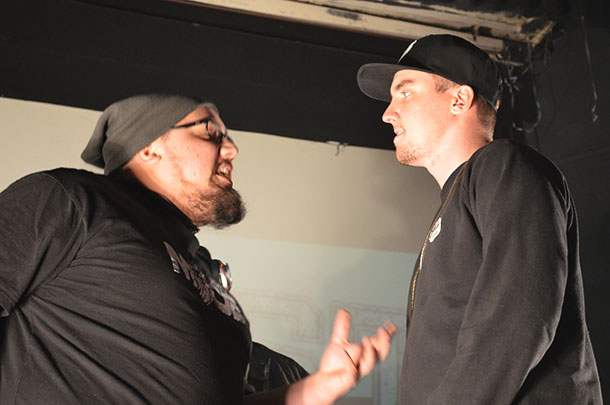 As the main event of the night, this one did what it was supposed to do. Q had the advantage with the flow of delivery but Loris had more quotable lines: "Hands will twist up his mug like pottery class" and "My [gun] kicks when it sings like the Lollipop Guild."

This was Q’s second visit to BeastMODE and he’ll be back in Toronto soon for his GZ debut. 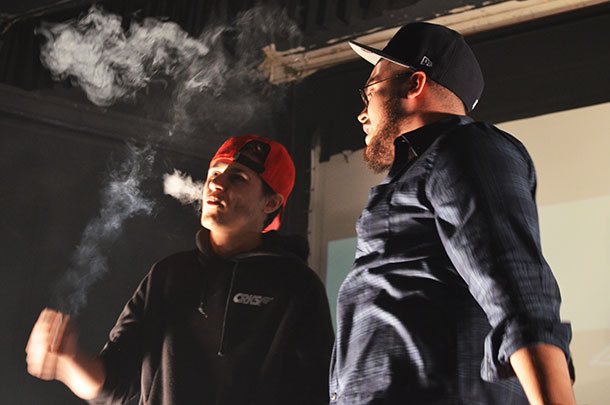 Highest energy battle of the night.

Joey’s a 22-year-old firecracker from Toronto, around 20 battles deep at this point, with an easy cockiness, and multi-syllabic rhyming patterns that rival Dizaster’s.

Lev came in from New Jersey, and was polished for three rounds with an energetic and consistent delivery.

Despite both emcees being loud and aggressive, it never felt like there was real tension between them. They seemed to be disconnected from each other, almost battling by satellite link. If they actually didn't like each other it would've elevated the entertainment value of the battle. 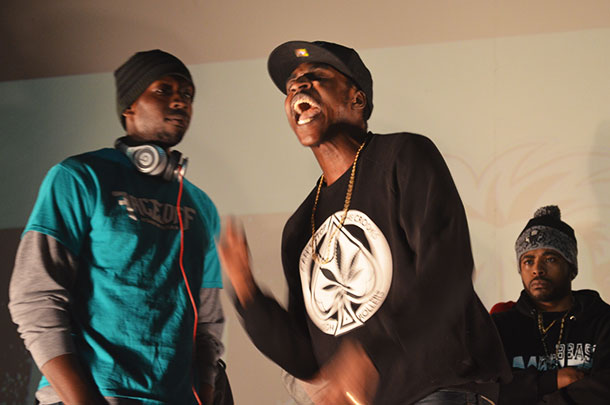 Franchise is another standout out from the BeastMODE roster. His aggressive gun bars hit hard and his delivery suits him well. Someone in the crowd described him as a combination of Tay Roc and Hitman Holla. The kernel is certainly there, he just needs some more finesse to make it fully pop. The difference right now is that both those guys are experts of pace, knowing when to slow down to let a bar hit harder.

Baltimore Grind Time veteran Troy Brown, battling in Toronto for the first time, kept it interesting and used his sense of humour and freestyle ability to coast through the end of his third after his writtens escaped him.

Merge One vs. The Grimace 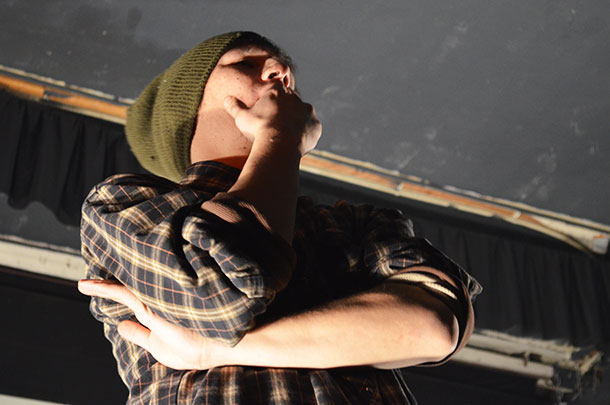 Grimace, realizing he's about to get slapped.

Merge One slapped THE SHIT out of The Grimace in a league-sanctioned “Slap Battle” where the winner gets to smack the loser with a palm full of baby powder. The battle was over after Grimace choked near the start of his first and he mostly stumbled through his second and third but still seemed to be enjoying himself.

Merge was fully prepared and picked up bodybag of the night easily.

Hopefully more leagues adopt the format: it raises the stakes and gets the crowd riled up.

Shortly after the slap, Grimace won the league’s 2014 “Good Sportsman of the Year” award. Well deserved.

Robertz debuted with a heavily URL-influenced style against Gravity in a battle that set the day off right. 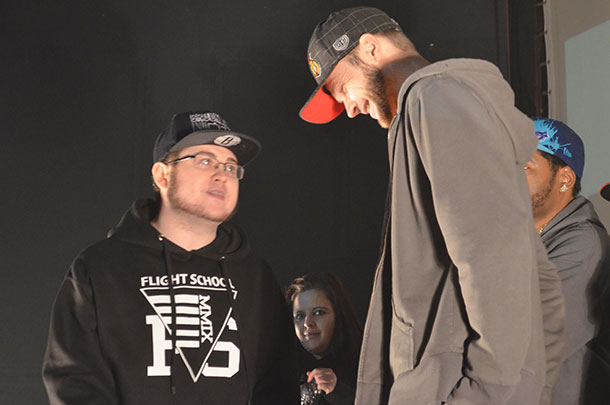 Mr. Sly4Life made a return to the league in his first battle since last March and put on against a motivated Raiden Black. 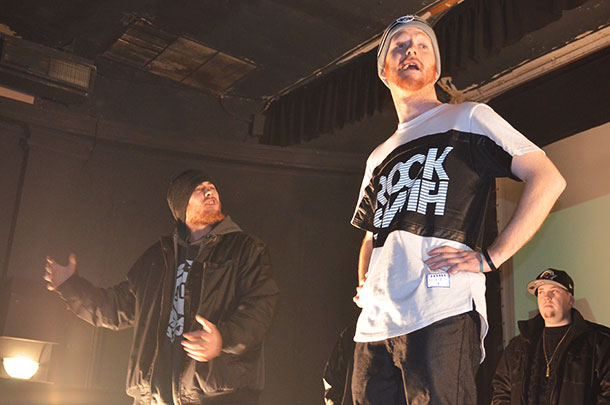 Peppe The Kid brought stage-stomping and hand-slapping aggression against Jayyohh that would've fit in at a We Go Hard event. 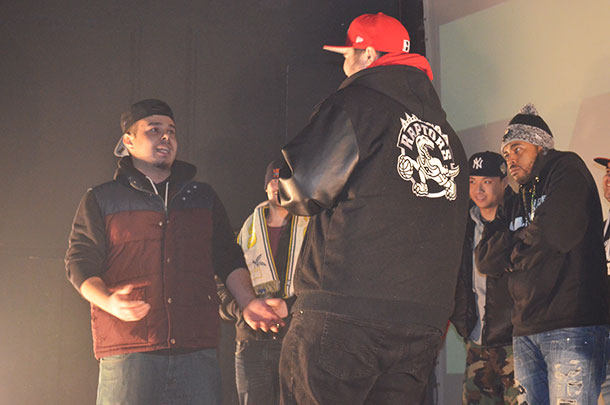 Peppe The Kid vs. Jayyohh

Pappy Mason and Gripsloc faced off but couldn't get much reaction from the crowd in what seemed to be an off night for both. 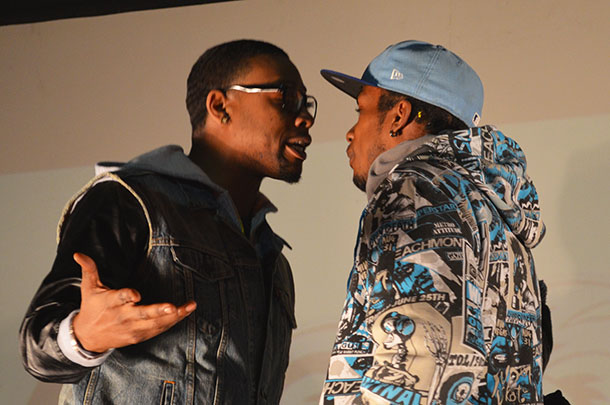 And some more photos from the night: 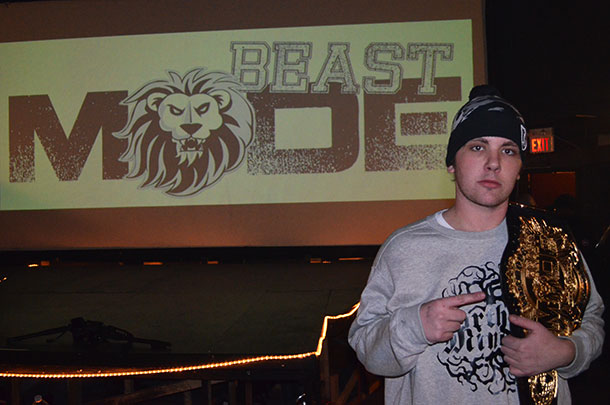 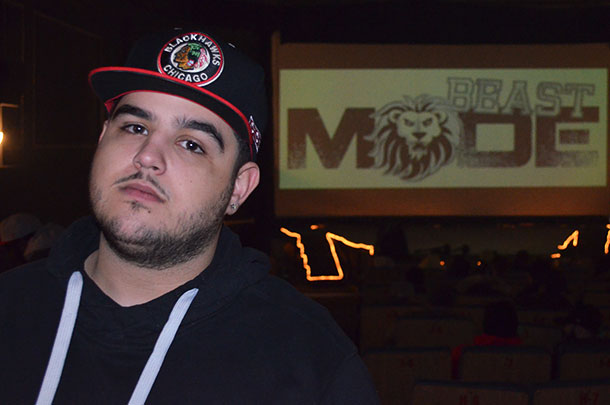 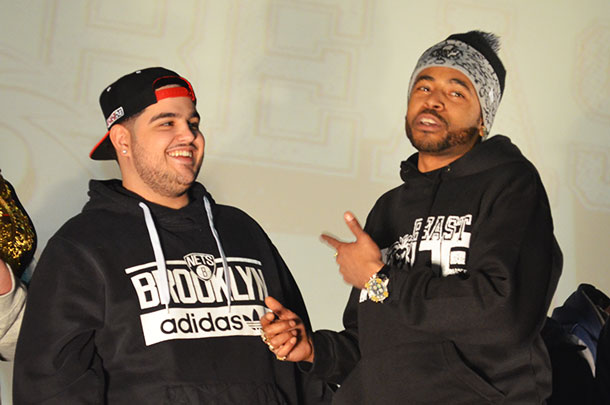 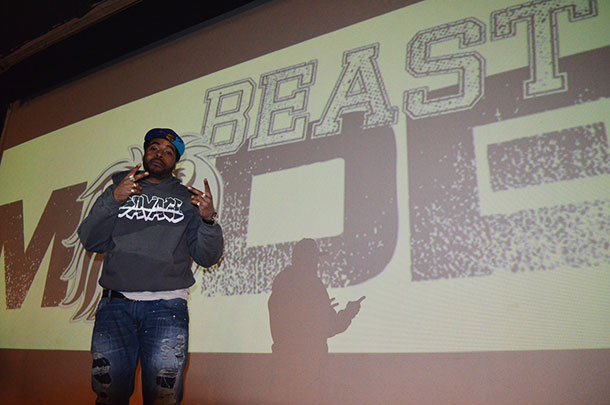 Kriss Cain on stage between battles. 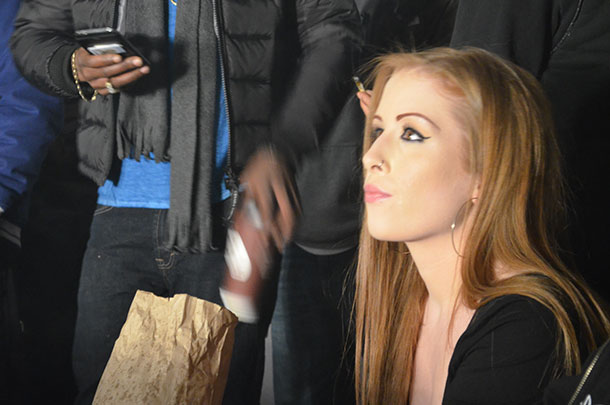 Were you there? What did you think of the event? Let us know in the comments section.

Chris Mitchell is the editor-in-chief of BattleRap.com. He's a trained journalist, the co-founder and former EiC of TOBattleBlog.com, and has been going to battle rap events since Bender spat his first Sorry Player scheme against Miracle. He lives and works in Toronto. Follow him on Twitter @BattleRapChris.